Icecream for Breakfast (What would Robin Williams do?)

This week I was inspired by my residents and Robin Williams to write this post. You may have heard that upon autopsy of Robin Williams’ brain, it was discovered that he had Dementia with Lewy Bodies (LBD). When I first heard of his death and some of the symptoms described, I said to a close friend “I wouldn’t be surprised if he didn’t have LBD.” Of course, my friend said “You’re just saying that because you’re always around it!” As I thought back to what I learned about as a psych major, specifically the availability heuristic, I thought, “Yeah, you’re probably right.” But to me, hearing how his death came about, it just didn’t sound like the Mrs. Doubtfire or Patch Adams that I grew up with. I will say, this is one time I wish I was wrong. I remember Robin Williams as being energetic, happy, hilarious, and fun-loving. So, in honor of Robin Williams, I think that it is appropriate to ask ourselves “What would Robin Williams do? (WWRWD)” with dementia care.

I cannot tell you how many moments that saying “What would Robin Williams Do?” would have been PERFECT! Let me give you an example. A few weeks ago, I stepped in with serving breakfast as my team was a little behind getting other residents up (hey! It happens! My team is AWESOME!). As I am running through the breakfast options for one resident, nothing interested her. So, I said “How about chocolate ice cream?” She smiled and said “That sounds perfect.” Before long, everyone was asking for chocolate ice cream. As one of my team members brought out another resident for breakfast, she looked at all of the chocolate ice cream and said, “What is going on?” And I said “They wanted ice cream for breakfast!” She laughed at me and continued working. Although my team thought it was hilarious, I had a reason behind it which I shared with them later. 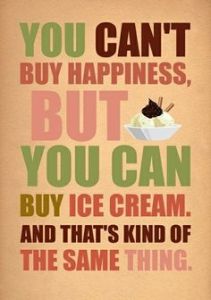 As we age, our tastes change. More specifically, we have a greater taste for sweet foods and less taste for other foods (Tip: Splenda is sweeter than Sugar so one or two splendas will help someone eat something better than 10 packets of sugar! But be careful as some ingredients in artificial sweeteners may cause diarrhea so monitor closely). Eating and dementia can be difficult due to changes in sight, attention, language, physical ability, etc. Sometimes residents who cannot eat solid foods will become agitated if someone next to them does have solid foods. In other words, ice cream is great for everyone! Why?

The best reason of all is the emotional response to my “Ice cream for Breakfast” method. The residents were SO happy that when the Activities Assistant came in 2 hours later they asked her if they could go for “Early Ice cream” tomorrow. She had NO idea what they were talking about but then they explained “That woman (me) gave us ice cream for breakfast today.” Remember how we talked about the amygdala in a previous post (Let’s talk about sex, baby!)? Just in case, here is a quick reminder:

“The part of the brain that regulates emotions (Amygdala) remains active throughout the entire course of dementia. So things that bring someone pleasure, like sex or ice cream, will continue to bring pleasure to someone with Dementia.”

This is why my residents, who have dementia, were able to remember the ice cream they had for breakfast. So I ask you this “What would Robin Williams do?” I think he would say “eat the darn ice cream!”